China has an eye to increasing its investments in the Pacific, and a new development plan on the island of Yap in Micronesia (see map below) has been turning heads in the region. Kaselehlie Press, a Micronesian newspaper, has reported that the plan calls for 8 to 10 hotel complexes and 8 to 15 golf courses, to provide services for as many as 10,000 hotel rooms by 2020.

Notwithstanding environmental concerns for the small, 39 square mile island, this move reveals a significant geopolitical game occurring in the region that has severe ramifications for US interests in the entire Asia-Pacific. Micronesia occupies an area of strategic importance for both naval and trade interests on a global scale. At the same time, most Pacific island economies are so small that they cannot support a modern model of government. Their isolation and limited natural resources make economic independence an elusive goal. Most would have to double their economic output in order to have a sufficient tax base to support their governments. Consequently, they depend on foreign aid in order to provide the difference. Some have become desperate enough to enter the business of recognizing separatist states such as Abkhazia and South Ossetia in exchange for economic aid.

Others have maintained economic and military ties with a wealthier country through a Compact of Free Association. Under this system, a relationship exists between two states under which one state takes responsibility for providing certain services to another, often in exchange for certain privileges. The US maintains Compacts with three Micronesian states: Palau, the Federated States of Micronesia, and the Marshall Islands. The US takes responsibility for defense and foreign relations, offers access to a number of social programs, and provides certain tax advantages. In exchange, the US has the exclusive right to maintain a military presence in the region and to operate bases.

These military privileges are in keeping with concerns among members of the post-World War II military brass regarding the security of the strategic U.S. base on Guam. A solitary U.S. base in the western Pacific before the war, Guam had fallen early because it was a sitting duck—the Japanese military dominated the region and had the island surrounded. Hoping to avoid a repeat scenario, the U.S. military and government sought to bring Micronesia firmly within the U.S. sphere after the war in order to develop a strategic network of bases to support Guam’s defense. These concerns resulted in a U.N. trusteeship which lasted for about four decades before the Northern Mariana Islands joined the U.S. permanently as a territory and the three aforementioned countries gained independence in free association with the US. These Compacts went into effect in the late 80s and early 90s, and had a renewable term of fifteen years. The Compacts for the Federated States of Micronesia and the Marshall Islands were renewed in 2003.

However, the Compact with Palau expired in 2009. Two years of negotiations resulted in a 35-year renewal agreement which was presented to the United States Congress in January 2011. Adoption has been delayed not from opposition to the agreement, but from a dispute between President Obama and the relevant congressional committees over how the aid program will be paid for.

Further delay will compromise the American grand strategy in the Pacific. President Obama laid out this strategy in a speech to the Australian Parliament in November 2011, where he declared that,

“As we plan and budget for the future, we will allocate the resources necessary to maintain our strong military presence in this region.  We will preserve our unique ability to project power and deter threats to peace.  We will keep our commitments … Our enduring interests in the region demand our enduring presence in the region.  The United States is a Pacific power, and we are here to stay.”

Allowing the minutiae of funding to derail American commitments in the region does not project power. Guam’s delegate to the U.S. House of Representatives, Madeleine Bordallo, later argued,

If the U.S. continues dithering in Micronesia, then it will send the people of those countries the message that their relationship with the U.S. is not solid. They will look elsewhere for economic and military partners. This partner would most likely be China, which has demonstrated considerable interest in investing in the region, as evidenced by the massive development program on Yap.

Yet Chinese incursion into Micronesia is becoming more likely the longer Compact renewal process lengthens. Frustration with U.S. inactivity has continued to mount, and in July the Palauan ambassador delivered a letter stating the following:

This would be a catastrophic blow to American interests in the Pacific. China has been robust in seeking to develop its fledgling naval power in the Pacific, and the U.S. cannot afford to have a repeat of the lessons learned in World War II, in which control of Micronesia was key to amphibious military capability along the Pacific Rim. Roughly a quarter of American losses in the war occurred in securing that capability. Furthermore, American economic interests are at stake because important sea-lanes in the western Pacific run directly through Micronesian exclusive economic zones.

The Compacts that the US maintains with the Micronesian states cost well under $1 billion a year, but offer an irreplaceable strategic position in the Pacific. The program has bipartisan support, so it would be a shame to lose it because of a squabble over the details of its funding. 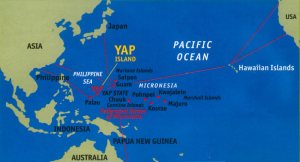 One thought on “Why Micronesia Matters”