Why is the prison population in the United States so high compared to other countries? While the U.S. represents about five percent of the world’s population, it houses nearly 25 percent of the world’s prisoners. It may be the cas, then, that the high incarceration rate in the U.S. is a sign of our advanced society with laws and mechanisms to enforce them.  But other countries with these same features have much lower rates of incarceration. Our closest geographical and cultural neighbor, Canada, has an incarceration rate of 117 per 100,000 people compared to 743 per 100,000 in the U.S. Most modern, western nations have a much lower incarceration rate, while our rate is more similar to the likes of Russia and Cuba.

The reasons for the high rate of incarceration in the U.S. are extremely complex, but one of the largest contributing factors of our huge prison population and high rates of violent and non-violent crime is undoubtedly our unique drug policy and the so-called “war on drugs.” A term coined by Richard Nixon, the “war” which has cost billions of dollars and thousands of lives did not begin in earnest until the 1980s, and we are feeling the ramifications of that war today in our over-crowded prisons.

Fast forward to 1990. With the drug war in full swing and ramping up significantly during the 80’s, we see a much different picture in our prison populations: 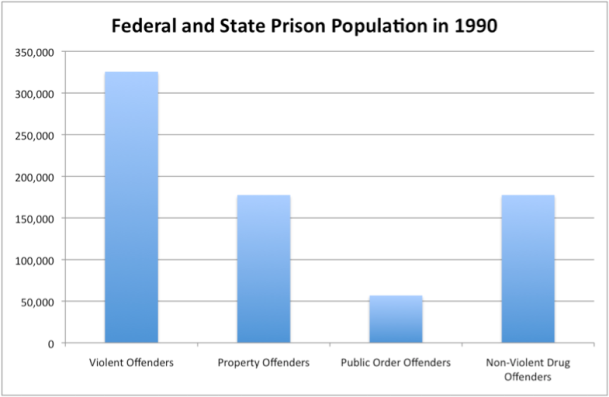 Aside from the ethical questions involved in a state making recreational drug laws a crime deemed worthy of incarceration, the damage to America’s budget and society due to the resulting enormous prison populations is both massive in scale and appalling in implication.

The most obvious problem abundant prison populations create is fiscal. Keeping people locked up is surprisingly expensive. We feed them; give them clothing, power buildings to live in; pump water into those buildings, etc. States currently spend $40 billion on prisoners every year. Also, keep in mind that an economist would say that this cost is only part of the overall monetary loss to society, since we can (mostly) assume these prisoners would otherwise be working some sort of job to gain income and purchasing products in our economy.

More startling consequences of maintaining this many prisoners, however, are what they cost us relative to other government services that most people would deem more essential than locking people up for doing drugs. For example, according to reports by the Department of Justice and the National Education Association, in 2009, the state of California spent $47,000 per inmate but only $9,000 for every student. New York spent $56,000 per inmate and $16,000 per student.  The ramifications of these figures cannot be emphasized enough. As a society we must ask ourselves: is it more important to imprison an otherwise law-abiding citizen for smoking pot in their home or to fund a child’s education?  Which of these expenses is more in our interest?

As if this horror was not disturbing enough, violent criminals — murderers, rapists, and child molesters, are increasingly being paroled to make room for non-violent drug offenders. In 2006, 23 states were operating at over 100% prison capacity, and many release violent offenders to make room for new inmates, some of whom have been arrested for recreational drug use.

Given that prosecuting recreational drug use leads to such horrible consequences for our prison system and society, we need to very critically evaluate what possible benefit comes from prosecuting non-violent drug crime. Our over-crowded prisons take huge sums of money away from other government services, and make our streets more dangerous by letting violent criminals go free to make room for people who have done nothing wrong but use a substance that someone else has decided should be illegal.

One thought on “The War on Drugs floods our prisons”