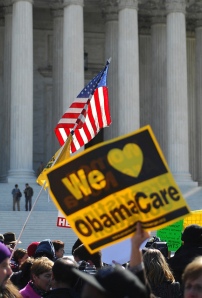 After years of taking heat from Republicans on healthcare, Democratic strategists have suggested what was once the unthinkable – embracing the oft-spurned Affordable Care Act, colloquially known as Obamacare, in the 2014 election. Key provisions of the bill are set to be implemented in January 2014, and the ACA will almost certainly again play a central role in the next elections, but Democrats are confident that there is enough to like about the bill that they can make a case for it next year. This confidence may be a bit misguided however, and Democrats would do well to pay attention to several challenges the bill will present in next year’s election.

Democrats so far have benefited from the fact that currently only the most popular aspects of the bill, such as allowing children to stay on their parents healthcare plans until they are 26, have already been implemented. Starting in January 2014 the most important and contentious components of the bill will start to go into effect, including insurance exchanges and the individual mandate, and it’s at the least unclear what the immediate effects will be.

One outcome more probable than all the others is that, on the whole, premiums will rise in 2014, as they have virtually every year in the past decade due to rising healthcare costs. Last year the Congressional Budged Office predicted that rates would go up on average 5.7% a year from 2012 to 2022. How different this number would be without the ACA is up for considerable debate, but it’s all but certain that Republicans will credit Obamacare with most if not all of the rise in premiums. This presents a unique challenge to Democrats, who basically have to convince voters that things would have been worse without Obamacare, a complicated argument that might not resonate with voters. Even if premiums on the whole don’t rise, Democrats have to hope that rates will fall for the right groups, like seniors, and not rise for others, like middle class families.

Even if Democrats manage to dodge the bullet on higher premiums, they must hope that the implementation of the bill itself goes off without a hitch. The process of fundamentally changing the largest healthcare market in the world is unlikely to come without a few hiccups. Republicans, if they’re smart, will blame the first sign of trouble on Democrats, who at the very least should hope that any problems in implementation are minor and will be sorted out by the time November rolls around.

Another consideration is that the strategy of embracing healthcare reform is more or less uncharted territory for Democrats. While Republicans have always made a big deal of healthcare, Democrats shied away from it in 2010, and in 2012 healthcare took a backseat to larger issues like the economy. Adding to this is the fact that for many Democratic Senators who rode Obama’s coattails in 2008, next year will be their first reelection campaign. It’s unclear how well these senators or their constituents will respond to attacks from the right on Obamacare, and many of these districts may be vulnerable for that reason.

Already there are troubling signs for Democrats; a NBC/WSJ poll found that 49% of Americans think that the ACA is a bad idea, a record high. While most don’t want Obamacare repealed either, disapproval numbers are trending upwards, and the idea of rallying behind a bill that almost half of the country actively disapproves of seems like it might be a bad idea politically.

The worst-case scenario is, of course, that premiums go up, insurances exchanges face many technical problems, and freshman senators face reelection challenges. If premiums fall for key groups like seniors, insurances exchanges quickly sort themselves out, and Democrats run their campaigns better than Republicans, then healthcare may end up not posing a problem for Democrats after all. In particular, the newfound enthusiasm for Obamacare may cause Democrats to advertise for an issue they thus far have largely ignored and to finally negate some of the overwhelming attacks Republicans have been mounting on Obamacare over the air. An increased ad presence may allow them to counter any headwinds they will face from healthcare in 2014.