One of greatest falsehoods that clouds the discussion over whether to raise the minimum wage is that these workers are underpaid compared to the value they provide to their employers.  Massachusetts Sen. Elizabeth Warren made the case, “If we started in 1960 and we said that as productivity goes up, that is as workers are producing more, then the minimum wage is going to go up the same. And if that were the case then the minimum wage today would be about $22 an hour.” Her comments were in reference to a 2012 study from the Center for Economic and Policy Research (CEPR).  While the idea that workers at the lowest rungs of the pay scale have a dearth of uncompensated productivity is deeply appealing, it is equally untrue.

The Bureau of Labor Statistics (BLS) releases annual data on the labor costs and productivity of workers across all sectors in the economy, including those in minimum-wage paying sectors which include limited- service restaurants (fast food) and the hospitality industry.  In the case of workers in the fast food industry, pay has nearly doubled since 1987 with rises in the minimum wage. Per worker output however, has only risen by 4.8 percent over this time period: 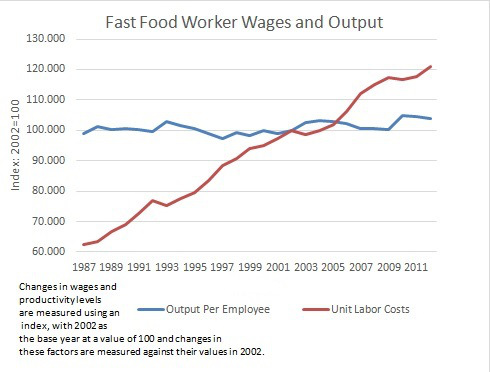 What data from the federal government suggests is that most workers in minimum wage positions are actually overpaid given their stagnant levels of output.  How much has the composition of work changed for cashiers, dishwashers, or hotel maids over the past quarter century?  Their capacity to accept in-person payments, wash dishes, and clean hotel rooms has not increased like workers in industries like IT or telecommunications have in their ability to deliver goods and services.

After decades of misguided moves by legislators to raise the minimum wage at the state and federal level, young workers are finding themselves increasingly priced out of the labor force.  From 1987, when the minimum wage was $3.35 an hour to 2012 where it now stands at $7.25, the unemployment rate for workers aged 16-19 increased from 16% to 24%.

Proponents of a higher minimum wage need to understand that the private sector is not a cash cow that can be milked whenever they deem it in the public interest.  If firms are mandated to pay their workers wages that exceed the value that they provide, they will either shift greater workloads onto fewer and fewer workers or make greater strides towards automating their production process.  Electronic kiosks where customers can order their meals have already been making inroads into fast food locations for several years.  And now casual restaurants that have traditionally relied on humans to serve their customers have started to equip their tables with iPads.  These allow their patrons to order meals and pay for them without ever leaving the comfort of their seats.  This essentially erases the need for servers to perform two out of their three essential duties, leaving them with the sole task of delivering the food.  By continuing to raise the minimum wage, government at all levels is only worsening the competitive position of workers who are now competing with information technologies that decline in cost every year.

A serious case can be made that as a society more must be done to help the less fortunate.  But pricing the worst-off among us out of the job market will only lead us further from alleviating poverty.