“Everything is amazing right now and nobody’s happy.”

Few things are truer than that we, as humans, fail to appreciate the present moment.  Regardless of how bad the “good ole days” were factually, we hang on to the notion that simpler technology equates to simpler needs, simpler problems, and simpler living.  While being lost in the emergent moment and the digital and technological bombast of today, we narrate out the complexity—the totality—of past times into simple, linear, moral tales, wherein caricatures supplant the then-living.

In a 2009 interview on Late Night with Conan O’Brien, the comic’s comic, Louis C.K., explains,

“I just feel like, we may be going back to [simpler times].  In a way, good.  Because when I read things like the foundations of capitalism are shattering, I’m like maybe we need that.  Maybe we need some time where we’re walking around with a donkey with pots clanging on the sides.”

“[E]verything is amazing right now and nobody’s happy,” Louis continues.  “In my lifetime the changes in the world have been incredible.  When I was a kid, we had a rotary phone…. Do you realize how primitive?  You’re making sparks in a phone.”

To disagree with Louis’s observation seems rather difficult.  All we need to do is to look at ourselves and our society to witness this ubiquity as testimony.  As if by law of human nature, complacency inevitably sets in.  With protracted high rates of technological growth, just meeting marginal expectations fails to capture and inspire the public mind.  If we expect flying cars and only get 140 characters, we overlook the benefits—the marginal breakthroughs—of the latter and focus solely on the former not yet materializing.

“Most real-world markets are somewhere in between…”

The now primitive was once the cutting-edge;—before the luxurious became the commonplace and we, the complacent.  Moreover, there is but one way to generate the next cutting-edge, to birth future innovations, to create tomorrow’s world anew: funding capital investments today.

First, some may mock the thought that the U.S. telecommunications and information services industries are competitive.  Yet, this springs from a faulty understanding of modern economic theory and empirical analysis.  Within economics, competition is suspended between two polar models: the Bertrand (price) model and the Cournot (quantity) model.  With the former, just two firms can maintain a competitive market outcome, whereas with the latter, such an outcome will not emerge unless the number of firms reaches the infinite.

Yet, as William Lehr footnotes, “Most real-world markets are somewhere in between… However, analysts almost universally agree that there are significant competitive benefits in having more than two facilities-based competitors.”

In their book, The Need for Speed: A New Framework for Telecommunications Policy for the 21st Century, Robert E. Litan and Hal J. Singer discuss the current (and future) role of competition and investment in broadband.  Moreover, Litan highlights, “[T]here are at least two providers of access (wireline and wireless) in virtually all of the United States, and at least two providers of wireline access (cable and telephone) in nearly three quarters of the United States (when broadband is defined as 6 Mbps down or faster).”

It is important to understand that competition is as diverse as diversity is competitive.  And with this layering of providers—this vying between inter-platform competitors—to meet the insatiable demands of evermore heterogeneous consumers, the U.S. is currently watching the regulating powers of market pressures successfully at work.

In the 21st Century, the U.S. has fully functioning capital markets to fund large investments.  And the role the government played in this area in the past is no longer a billable character and has nearly been written out of the script entirely.  The greatest role now for the government to perform is to continue removing obsolete and arcane rules, regulations, and mandates.

The 1996 Act commenced the deregulation of the Internet, or more appropriately quarantined the regulatory bum from spreading.  By doing so, the telecommunications industry competes today as a bifurcated system of suppliers.  Kovacs explains,

“The least-regulated platforms—Internet, cable, and wireless—are the most successful, because they have been free to innovate and to invest their capital efficiently.  The most regulated—the incumbent telephone companies (ILECs)—have been forced to waste both capital and operating funds on obsolete networks, thus limiting their ability to upgrade their infrastructure.”

Furthermore, Kovacs illustrates the impact of this government-forced waste:

“[F]rom 2006 through 2011, 53% of the capital investment made by the three largest ILECs was allocated to their legacy networks, while just 47% was spent on broadband infrastructure. Assuming that ratio is typical of the industry during those six years, and given that the ILEC industry spent $154 billion in [capital expenditures] during those years, the ILECs spent $81 billion on legacy networks, while just $73 billion was spent on modern broadband infrastructure.”

Many in the public have the perception the U.S. is lagging behind in the broadband race.  With roughly a one-half ratio of capital investment between mandated legacy networks and broadband infrastructure, how could the U.S. seriously compete?

Yet, even with such a handicap, the U.S. actually outperforms Europe in most key consumer areas, and heavy and sustained investment plays no small part.  In a report out just this June, Christopher S. Yoo writes, “The empirical evidence thus confirms that the United States is faring better than Europe in the broadband race and provides a strong endorsement of the regulatory approach taken so far by the U.S.”

If we consider the digital divide, for example, U.S. households with access to Next Generation Networks (NGA) (25Mbps) easily eclipse households in Europe.  According to Yoo, this broadband coverage comparison holds at the national level (82% vs. 54%) and only enlarges by restricting the analysis to rural areas (48% vs. 12%).

Due to unalike regulatory structures and competition models, broadband investment also differs exceedingly depending on which side of the Atlantic one finds herself.  Yoo writes,

“In Europe, where it was cheaper to buy wholesale services from an incumbent provider, there was little incentive to invest in new technology or networks.  In the U.S., however, providers had to build their own networks in order to bring broadband services to consumers.  Data analysis indicates that as of the end of 2012, the U.S. approach promoted broadband investment, while the European approach had the opposite effect ($562 of broadband investment per household in the U.S. vs. $244 per household in Europe).” 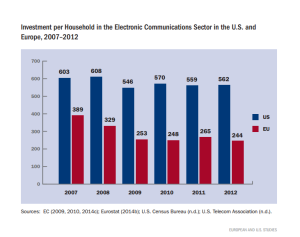 Unfortunately, due to the regulatory reasons outlined above, the Europeans are not experiencing stable, robust broadband investment.  Moreover, with a statistically significant negative impact on NGA coverage, the European approach to promoting broadband investment via service-based competition proves ill-equipped and thus ill-advisory.  The U.S. route of facilities-based competition, alternatively, shows a statistically positive upshot.

“Even in this troubled economy, communications companies… are investing…”

Particularly, in this age of austere budgeting, government seems even less willing to provide the resources required to keep the lights on, let alone up with the astounding 60-percent-a-year growth in Internet traffic.  As Jim Cicconi adds, “[E]ven in this troubled economy, communications companies in North America are investing in excess of $60 billion a year in broadband technology.”

Make no mistake, allocating from the future to the present is how government investment works.  And in an economic downturn, the future finds itself even more discounted than it otherwise would be.  As long as the private sector willfully, let alone gleefully, funds tomorrow’s prosperity, why would anyone want to insert an institution that focuses so shortsightedly on today?

As Congress and the Federal Communications Commission (FCC) seek policies protecting the “Open Internet,” careful thought must be given to the consequential effects on capital investment.  As Kovacs reminds us,

“To an economy in which last year’s smartphone is already obsolete, Twitter is becoming passe and a gigabit connection is all the rage, regulations that were designed for a rotary phone connected to a 64 kilobit switched-access line would be disastrous.”

In short, Louis C.K. is right: everything (including U.S. broadband) is amazing right now and nobody’s happy.  With regards to the future, not much can change the latter, but for the former to remain true, we must foster capital investment today.  And to do that we must not let myopic regulations to get in the way.