As border security fear mongering steals the headlines (first ISIS, now Ebola), a slow-burning immigration drama is playing out between the world’s two biggest democracies. The controversy revolves around the H-1B visa, a 3-year nonimmigrant visa designed to attract skilled foreigners to fill U.S. labor shortages in the science, technology, engineering, and mathematics (STEM) fields. Since the program’s inception in 1990, Indian nationals have quickly established themselves as the leading H-1B recipients, obtaining 64 percent of the visas in 2012. Considering U.S. Citizenship and Immigration Services (USCIS) met the annual H-1B cap of 65,000 within a week for the past two years, the dominance of a single applicant pool merits further scrutiny. 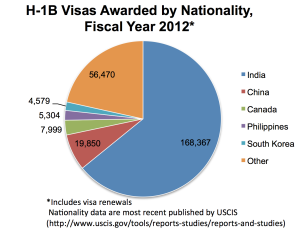 In order to understand the Indian H-1B phenomenon, it is crucial to note that the employer rather than the employee must apply for the visa. Accordingly, opponents of the current system target Indian information technology (IT) firms instead of criticizing the STEM workers themselves. Of the top ten H-1B-receiving employers in 2013, six are headquartered in India and another three (Cognizant, Accenture, and IBM) have larger workforces in India than the U.S, according to reports. While the fact that just ten companies filled nearly half of the H-1B cap suggests an allocation failure, the dubious hiring practices of some of these firms points to the program’s deeper legislative flaws.

The Department of Justice announced in October 2013 that Infosys, the top H-1B recipient that year, agreed to pay a $34 million settlement following allegations of systematic visa fraud. According to the announcement, Infosys used B-1 visa holders (classified as “Temporary Business Visitors”) to perform work that required the more expensive and competitive H-1Bs. The government began its investigation after former Infosys employee Jay Palmer accused the outsourcing company of committing conscious visa fraud, which in turn displaced thousands of American workers. According to the allegations, Infosys illegally tasked B-1 visa holders with contract work while paying Indian wage rates.

Although not a loophole within the H-1B legislation itself, Infosys’ status as the top H-1B employer and the recipient of the largest corporate immigration penalty in U.S. history raises a red flag. If the firm knowingly employed B-1 visitors to reduce labor costs, its overreliance on the H-1B suggests it may view the skilled worker visa as a cost-cutting tool as well. While the Department of Labor (DOL) requires H-1B employers to pay the “prevailing wage,” a lack of market testing and oversight leaves the law open to exploitation. Similarly, H-1B employers must take “good faith steps” to hire U.S. workers before recruiting foreign citizens but they do not need to prove these claims to the DOL.

Critics of the visa argue that H-1B employers pay below market wages and undercut the salaries of US tech workers. Ron Hira, a public policy professor at Howard University, has been an outspoken critic of the wage requirement’s weak statistical foundation. In a 2010 paper for the Economic Policy Institute, Hira cited an approved application by Infosys for 150 H-1B visas. The IT firm planned to pay the Atlanta-based “programming analysts” hourly wages as low as $12.25. In a more recent testimony before the Senate, Hira accused Congress of setting H-1B prevailing wage floors as low as the 17th percentile for certain positions.

The Bureau of Labor Statistics (BLS) estimated the median wage for computer programmers to be around $74,000 in 2012, while the median wage for programmers on an initial H-1B was around $65,000, according to USCIS. According to the Government Accountability Office (GAO), age discrepancies between H-1B recipients and U.S. tech workers partly explain the gap in the median aggregate wages. A 2011 study by GAO only found a statistically significant wage gap in H-1B and U.S. computer-related professionals aged forty to fifty. The report cited likely skill discrepancies between workers in this age group as the source of the gap, but its analysis was limited due to insufficient data.

As a May paper by the Brookings Institute highlighted, the government must collect more detailed data on skilled labor shortages and current H-1B holders. While a skills mismatch is a feature of every economy, the DOL must take a closer look at the particular industries where labor shortages persist. Further demographic analysis of the native and H-1B STEM worker populations would also determine which age and skill groups are directly competing. Currently, USCIS does not even track the number of H-1B holders working in a given year, making it difficult to empirically asses the program.

With an estimated 54 percent of H-1Bs allocated to entry-level positions in 2010, the notion that the visa attracts the “best and brightest” needs reexamination. Since prevailing wage floors are tied to a four-tier experience scale, H-1B employers have an incentive to hire less-skilled workers or understate the skill level required for a position. Rather than wrangling over the size of the annual H-1B cap, reform efforts should focus on improving the quality of the incoming applicant pool. In the absence of more descriptive labor statistics, this can be achieved in several ways. First, raising the number of cap-exempt H-1Bs for workers with advanced degrees (currently 20,000) would attract foreigners with more specialized skills. USCIS should also prioritize STEM workers with U.S. graduate degrees in order to slow down the “reverse brain drain.” In addition, creating a separate cap for each wage tier would discourage firms from underselling the experience level a given position demands.

One attempt at qualitative reform targets firms that exploit the H-1B loopholes rather than the loopholes themselves. S.744, a bill which passed the Senate but has yet to reach the House, proposes new penalties for “H-1B dependent” employers. This would add a filing fee of $10,000 per application for firms where H-1B holders make up 50 percent of employees. While the move to target Indian outsourcing firms has broad political appeal (suiting both protectionists and U.S. tech companies), the bill scapegoats these companies rather than solving endemic inefficiencies in the law. Instead of tabloidizing the H-1B debate along with the rest of immigration reform, it’s time the government gathered some data and tightened the legislation. Then we can all have a smarter conversation about the best and the brightest.