Jeff Bezos’ plans to create commercial drone deliveries for Amazon in upcoming years might be premature based on the severe lack of new regulation establishment from the Federal Aviation Association (FAA).  The Association cannot keep up with American innovation and has resorted to banning most drone usage, aside from several private-sector drones, until it completes new regulations.  Operators in the U.S. drone market have been stifled by these abysmal injunctions.  While DHL plans to set up a drone delivery system in Europe, sending small packages and medicine, companies such as Bezos’ in the U.S., are floored as they try to find a way around the U.S. bans.

According to Steve Klindworth, head of a Da-Jiang Innovations Science and Technology Company (DJI) drone retailer in Liberty Hill, Texas, if the FAA does not promulgate fresh regulations for cutting-edge drone technology “It’ll reach a point of no return where American companies won’t ever be able to catch up.”  Many companies, both in the U.S. and worldwide, have conceived of incredible drone technologies in recent years.

While most recreational uses of drones are permitted without strict regulations, the moment a U.S. company wants to use drones commercially FAA rules don’t allow legal use without explicit regulatory permission.  These bans are repressing our free enterprise system and, although strict protocols should be followed to ensure safety, the FAA needs to enact regulations that guide drone use rather than subdue it.

Since the U.S. ushered in the flying 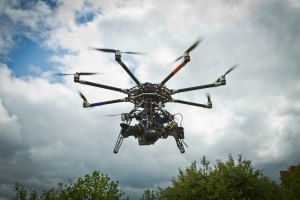 drone saga, introducing the drones as convoluted war machines, the U.S. unmanned aircraft private industry has found FAA regulations vexing to work with due to safety concerns.  Many U.S. entrepreneurs are finding it difficult to get off the ground while rivals in countries such as Australia, China, Germany, England, and Japan are flourishing.

Wasser-und Verkehrs-Kontor GmbH (WVK), an engineering firm in Neumünster, Germany, paid $50,000 for a drone octocopter, using it to construct highly technical three-dimensional models of buildings and roads.  After making only three 10-minute flights to an intersection at risk of flooding, it created a 3-D model within 0.4-inch accuracy.  It took ground workers two days to create a two-dimensional map of the same intersection.  Measurements were nowhere near as accurate, with margins falling within 1.6 yards.  Additionally, Japanese drones are spreading pesticides over crops and construction sites are being surveyed in England.  Contrarily, Seattle-based Applewhite Aero, a company that creates crop-monitoring drones, is currently moving operations to Canada where flight clearance is less hostile.  All but a handful of U.S. companies have this synonymous issue.

Both Google and Amazon have launched drone delivery initiatives that had many American consumers excited.  Nevertheless, they were prompted by the FAA to test prototypes at offshore locations such as Canada and Australia.  California-based Trimble Navigation, one of the most successful U.S. drone firms, acquired a Belgian drone company in 2012.  The U.S. firm conducts all of its drone business outside the U.S., not even making or selling a single drone on American soil.  Fresno Bee, primary news source for the central San Joaquin Valley, recently acquired a drone gathering for news, although other news organizations have received cease-and-desist orders.

While relatively friendly policies have been utilized in foreign countries, allowing foreign drone makers to flourish in a vast array of business opportunities, U.S. firms have hardly been able to afford doing business in those countries due to U.S. export laws.  The number of approved U.S. commercial drone operators currently totals eight, since the FAA recently authorized six more companies petitioning for legal prerogative from the bans.  Although 25 proposals by 24 states were brought to the attention of the FAA, it took ten rigorous months of work to create the regulations for the six proposals that were chosen.

This is a comprehensive step towards balancing air space between remote aircraft and passenger planes.  The six new firms were filmmaking companies that coveted the use of drones.  Perhaps the film companies easily won because they will be flying their 30-40 pound drones at low altitudes on closed sets.  Even applications for drone services such as agricultural work, power line inspections, or building site inspections are forecasted to gain approval without too much bickering.  Contrarily, regulations for flight approval over populated areas for services such as Amazon and Google’s delivery systems are expected to take much more time to complete.  More than 40 requests are still pending for regulations from the FAA.

Controlling airspace and drone use is a safety issue, one of the biggest arguments from the FAA for why it has taken so long for regulations to be approved.  However, one may use the argument that over 30,000 Americans die in vehicle crashes in the U.S. running mundane errands.  If drones were legal, they could arguably “run” these small errands for those 30,000, thus preventing the deaths.  Suffice it to say, the FAA obviously needs to efficiently propound new regulations in order for the U.S. drone industry to have any chance at flourishing in this rapidly developing world.

The FAA’s virtual quilt ban has frustrated these commercial entrepreneurs to the point that they have petitioned for new regulations to be made available more quickly.  Concerned about the late demand for commercial drones, Congress ordered the FAA to hammer out new regulations by September 2015, stating that the FAA “shall provide for the safe integration of civil unmanned aircraft systems into the national airspace system,” a deadline to which many contractors are looking forward.  Hopefully the FAA will realize the urgency for these regulations and the vast array of benefits that may ensue when drones are more widely accepted on U.S. soil.