The opaque and loosely administered nature of the Medicare 340B drug-pricing program has lead to speculation over the appropriate use of program savings. Originally designed as a way to help patients save money on their prescription drugs, the 340B program is now criticized for failing to deliver those savings directly to consumer medications. Furthermore, a lack of transparency in the program has called into question the integrity of 340B and the entities that participate in it. While the initial goals of the program are admirable, a lack of structure and regulation has allowed the program to become a breeding ground for abuse and profit seeking behavior. Recent audits, performed by the Health Resources and Service Administration (HRSA) of covered entities in the Medicare 340B drug-pricing program show that 138 of 199 organizations (roughly 70%) violated program stipulations at least once in fiscal year (FY) 16.[1] Among the most common infractions were diversions of 340B savings, providing an incorrect 340B database record and using the program to receive duplicate discounts on pharmaceuticals. Increased oversight and regulations are needed to restore the 340B program to its original intent of providing prescription drugs to low-income patients at an affordable rate. 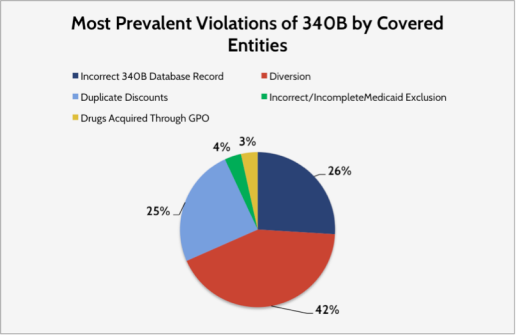