After three and a half hours of what seemed to be another episode of Desperate Housewives of Washington D.C., the House of Oversight passed several amendments to Taxpayers Right to Know Act, and the Regulatory Freeze for Jobs Act of 2012. Additionally the Oversight Committee authorized the Administrator of General Services to convey a parcel of real property in Tracy, California, to the City of Tracy. Essentially 150 acres of the land will be used for educational or recreational purposes. The Midnight Rule Relief Act was also brought to attention and sparked quite a debate in itself.

Most of the entertainment was seen about two h

ours into the meeting where the line of bipartisanship went up in flames as quickly as the Hindenburg. Representative Maloney claims the Regulatory Freeze for Jobs Act did little to protect women or minorities. Other than stating that women still make 77 cents for each dollar a man makes, she lacked a lot of substantial evidence as to how this act put women and minorities at a disadvantage. Representative Buerkle was quick to riposte saying that people are being held back by the economy and not by racism and sexism, while small businesses need to be given breathing room to be successful to help the economy. Though both representatives had honorable causes, the arguments were not even about the job freezes to begin with, nor directly about how to bring the unemployment rate down. In the end it turned into a debate to see who was more patriotic and could use the word “American” the most. 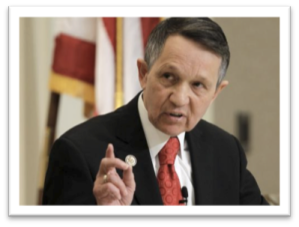 Representative Kucinich, however, stole the show with his five minutes, in which he used to accuse the Commodity Futures Trade Commission of trying to manipulate prices of oil through regulatory rules and contracts. He proclaims Wall Street’s Speculation adds an additional 15 to 18 dollars a gallon is added to each barrel of oil every week, according to a testimony given before the Oversight Committee just a week before. Therefore Kucinich proposed an amendment to delay indefinitely the CFTCs power to set position limits. He makes his amendment relevant to the Freeze Act by asserting that it helps the unemployment rate go down, as high oil prices are adverse to the Freeze Act’s goal.  Representative Jordan followed up by arguing that it was a supply issue since America is not oil self-sufficient, which hikes up the price, and instead we should use natural gas instead, which is domestically plentiful.

Nothing Good Happens After Midnight

H.R. 4607, the Midnight Rule Relief Act of 2012, is “to ensure economy and efficiency of Federal Government operations by establishing a moratorium on midnight rules during a President’s final days in office, and for other purposes.” Representative Connolly stated that even if the Oversight Committee disagreed with the presidents’ ability to perform midnight appointees, it was too bad because it is a constitutional power. He is also worried that following the logic of this bill, it would not only apply to the president but could then be used on those in Congress. Additionally this brings up the issue as to why any president would sign in any bill once he was considered a lame duck? Especially when if a president is re-elected to a second term they are considered a lame duck for their next four years.

Representative Cummings agrees with Connolly that it infringes on the powers of the president and takes the bill down a murky road. Though understanding the overall purpose and meaning behind the act, Cummings is worried about what would happen after that. Would Congress then keep chipping away slowly from the president’s constitutional powers?

Despite the debates, the Midnight Rule Relief Act of 2012 was favorably reported to the House of Representatives by voice vote.