The 2016 presidential race is wide open, in a sense, but in a sense it’s not.  While the Republican side will undoubtedly be a highly 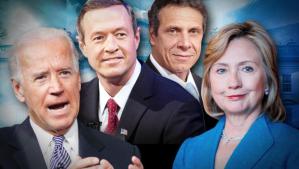 competitive horse race, the choice for the Democratic nominee will come down to one question: will Hillary run?

Others have been mentioned to have interest in running – Vice-President Biden, Governor Martin O’Malley, Governor Andrew Cuomo, and Senator Elizabeth Warren – but none have either the stature or fundraising capability of Clinton.  The Clintons have a robust network of donors and political professionals waiting in the wings, waiting to see if Clinton decides to run.  Counted among her political allies is Vice-President Biden, who would most likely decline a run if the current Secretary of State jumps in the race.

Polling has already shown (as ridiculous as it is to poll this early) that Secretary Clinton would have a huge advantage in both a Democratic primary and the general election.  According to a Washington Post/ABC News poll, 57% of respondents said they would support Clinton while in her home state of New York, she enjoys a 75% approval rating.  54% of New Yorkers say they would support Clinton’s run while, by contrast, only 39% of New Yorkers say Governor Andrew Cuomo should run.

In an even more stunning poll, Public Policy Polling found that voters in Iowa preferred Secretary Clinton over Vice-President Biden by 41 points, with Cuomo, O’Malley, and Elizabeth Warren both in single digits.

So the Democratic side is simple.  If Hillary Clinton runs, the nomination is hers, probably without much of a fight.  If she decides not to run, however, the primary would be wide open and the nomination fight would probably be long and contentious.

In the absence of Clinton, New York Governor Andrew Cuomo is considered by many to be the front runner.  The son of Mario Cuomo, the former Governor of New York and presidential hopeful, he has served as Secretary of Housing and Urban Development (HUD) under President Clinton, New York Attorney General, and now Governor.  He comes from an impressive political family, is young, attractive, and a generally impressive man.

But recent events have revealed some cracks in the armor.  After November’s election, in which Cuomo endorsed multiple Republican candidates for the State Senate, the Governor refused to announce a preference for which party controlled the body, saying “A governor’s job is not to involve himself or herself in the internal power dynamic.”  Liberals in the national press were watching closely and immediately renounced the “failure to lead.”  MSNBC’s Chris Hayes referred to Cuomo as the “supposedly Democratic Governor” on his show and The Nation’s Katrina vanden Heuvel called on Cuomo to “join the fight of liberalism.”  The indomitable Markos Moulitsas of the Daily Kos went even further calling him “persona non grata in a Democratic presidential primary” and vowing to fight to defeat his candidacy whenever possible.

If Cuomo is weighed down by criticism from the Left, newly elected Massachusetts Senator Elizabeth Warren may have the opposite problem.  Warren, the former Harvard professor and first director of the Consumer Financial Protection Bureau (CFPB), is a darling of the Left and embodied the populist message of Democrats around the country in 2012.  But her brand of liberalism – a newfound emphasis on the rights of the working class as opposed to the excess of big banks and big business – has struck a particularly discordant tone with conservatives and moderates.  She’s a candidate who may play well in a primary, but could struggle in the general election, particularly given the Democrats failed history of nominating Northeastern liberals (Dukakis, Kerry).

Maryland Governor Martin O’Malley is neither disliked by the Left nor reviled by the Right, though he isn’t the most popular politician among Maryland Republicans.  No, O’Malley’s problem is not polarization as much as it is a lack of name-recognition.  Accord to a study by Public Policy Polling (PPP), O’Malley enjoys only 24% name recognition, even with his new position as Chairman of the Democratic Governors Association.  O’Malley could become a viable candidate only with a concerted effort over the next few years to increase his prominence and expand his policy bona fides.

Last, but not least, we come to Vice President Biden.  While Biden’s name recognition is far superior to any of the candidates besides Clinton (a benefit of travelling in a motorcade and having the Vice Presidential seal on the podium every time he speaks), he’s not seen as a viable presidential candidate.  Biden has very little appeal to Republicans and moderates, particularly outside of white working-class voters, particularly in the Rust Belt.  His age would also be a serious concern – he would be 74 in 2016.   Even if Clinton decides not to run and Biden is left as the most recognizable candidate, it’s hard to imagine Biden making a serious challenge.

And so the Hillary waiting game begins.  Most people believe that Clinton’s 2008 experience, where she announced her candidacy almost two years before the election, will lead her to wait until a later date to decide this time around.  This will result in an entirely muddled contest for most of the next three and a half years.  It should be fun to watch.