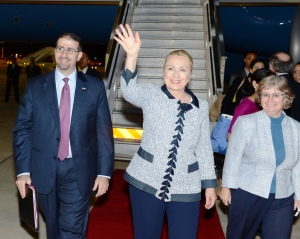 Secretary of State Hillary Clinton arriving in Jerusalem in November of 2012.

Today marks the final time the nameplate on the desk of America’s highest ranking diplomat will read Hillary Clinton. At close of business, the former first lady turned Senator, will leave her post as Secretary of State after 4 years of traveling nearly 1 million miles to nearly 100 countries, a record-breaking feat.

She has been called the greatest diplomat America has ever had. Notable leaders like Google chairman Eric E. Schmidt have hailed her as “the most significant Secretary of State since Dean Acheson” (…guess that dude Kissinger was a blip on the radar). Despite the impressive travel log, can we really call her one of the greatest Secretaries of State? I’m not entirely sure we can. Did she achieve anything pivotal in the vein of Kissinger’s China negotiations or Baker’s Soviet deal making? I’m not entirely sure she did. At the same time, that may not be Clinton’s fault. Allow me to explain.

There is no denying that Hillary Clinton will go down in history as one of the most influential women in the world. There’s a reason she’s topped Gallup’s Most Admired Woman list 10 years straight. And there were many impactful moments during her tenure as Secretary of State. Some keen diplomatic deal-making when Chinese political prisoner Chen Guangcheng escaped to the U.S. embassy in Beijing in April of 2012 successfully diffused tensions with the CPC administration and got Guangcheng to U.S. soil. But will the life of one Chinese defector impact Chinese-U.S. relations in 10 years? Doubtful. Her role in the Libya air campaign coalition is also a marked achievement, but that will be remembered in history as a British and French-led operation since U.S. aircraft flew less than a third of the missions.

There is a running theme here. Despite all the fanfare and celebrity surrounding Mrs. Clinton’s time as Secretary of States, the last four years passed with no landmark achievements worthy of a chapter in high school history books. She played little to no role in the drawdown of the wars in Iraq and Afghanistan. The Israeli-Palestinian conflict is more heated than ever. She ushered in harsher sanctions on Iran, but the threat of their nuclear capability and regional volatility still remains. However, is Clinton at fault for this lack of historic achievements? I don’t believe so.

40 years and a vast technological revolution stand between today and the days in the early 1970s when Kissinger secretly flew from Pakistan to Beijing to negotiate the opening of China. In today’s whirlwind of tweets, status updates, GPS, and 24 hours news, something like that would be impossible to keep secret. Mrs. Clinton cannot even get a haircut without some outlet broadcasting a story about it. With this constant coverage, her accomplishments are diluted across the 24-hour news cycle.

And then there’s her celebrity. Her role in the “Texts from Hillary” memes received more attention than her role in establishing the Equal Futures Partnership with 12 other nations to advance women’s rights across the globe. In a way, her celebrity status may have clouded some of her more notable achievements.

What’s more, the White House, Pentagon and Department of Defense now play a much bigger role in U.S. foreign policy. It is difficult to mark any major achievements in the Middle East when three other bureaucracies preside over international affairs and policy. This cacophony of voices and departments prevent any swift, decisive action on the part of one diplomat, even if it is the highest ranking diplomat in the country. According to veteran foreign policy advisor Aaron David Miller, major foreign policy surrounding the Middle East is “made, controlled, and micromanaged by the White House,” pointing out that Clinton “doesn’t own any issues.” So while we can point to Clinton’s lack of notable achievements, we must also point out that her ability to accomplish such feats was greatly inhibited.

While she may not have had the biggest seat at the table when it came to those big issues, I will, without a doubt, applaud Clinton’s work rebranding the United States in the eyes of many international leaders. She has reestablished a number of important, working relationships and has helped re-craft America as a nation of progress in equal rights for all citizens, especially women and the LGBT community. This rebranding will play a pivotal role in how the world sees the United States as we enter President Obama’s second term.

Advancing the image of the United States is a form of soft power that is critical to conducting foreign affairs, and Clinton has wielded it masterfully as Secretary of State. The sad thing is…soft power doesn’t flash as brightly in the pan of the 24 hour news media.