Attending the U.S. Senate Commission on Health, Education, Labor, and Pensions (HELP) helped to illustrate certain key points about current Elementary and Secondary Education Act flexibility waivers. One point is that due to the inability of Congress to reauthorize No Child Left Behind (NCLB), states have had to turn to the federal government to seek relief from the flaws of the NCLB, like the goal of 100% of students being proficient in math and language by 2014. 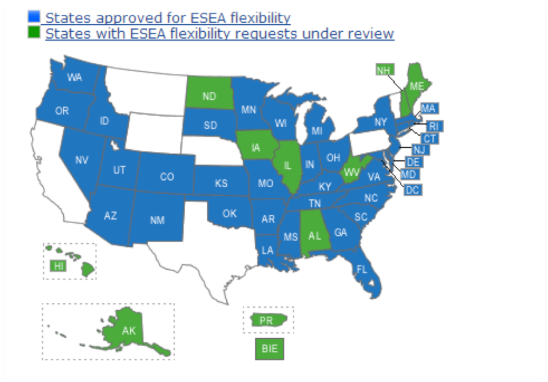 Courtesy of the Dept. of Education

Decisions that should be made at the local and state level are now being made by Secretary Duncan, who has been given too much authority to hand out these waivers. This from someone who opposes private vouchers and who approved racially based student benchmark systems in handing out waivers, like the one the Department of Education granted Virginia.

As demonstrated in the graph below, Virginia ESEA flexibility waiver included provisions that determined acceptable levels of achievement by race, instead of universal standards. Patricia Wright, Virginia’s superintendent of public instruction, believes that states should hold students to the same academic standards, but when it comes to measuring progress, they had to consider that students start at different points. The question then becomes, why would Virginia propose such a policy and the answer is that they wanted to receive a federal ESEA flexibility waiver to escape NCLB.

Although the waivers have provided some positive results – like providing states with 2.8 billion dollars of trapped money under the NCLB and increasing the number of schools that are accounting for students with disabilities – it is no substitute for the a reauthorization of NCLB. Dr. John B. King Jr., New York State Education Commissioner, commented in today’s hearing that reauthorization must remain a priority for the upcoming Congress. It is important for states like NY to have a basic national guideline that gives states flexibility to make decisions, like partnering with the private sector to help increase a student’s STEM education.

Looking at the general scope of elementary and secondary education shows that the achievement gap between students is increasing and the level of education has decreased. Consequently, it is up to Congress to step in and reauthorize NCLB to give authority to states to determine the educational direction for their students. Until this actually occurs, the federal government will continue to push for a one size fits all state education policy, which is made evident by the exchange of federal ESEA flexibility wavers for state compliance with predetermined conditions.