On Wednesday, April 10th, President Obama released his $3.77 trillion budget, as the president begins the arduous process of getting it passed through the Republican controlled House of Representatives.  In regards to education, the new budget contains very similar rhetoric used by the president during his 2013 State of the Union Address. For example, the president restates his goal of making universal preschool a reality for all young American students; his administration’s new college tool for students called “College Scorecard”; the desire to lower the price of college tuition; and reward K-12 schools that create classes that focus on science, technology, engineering, and math (STEM).  However, President Obama’s budget does provide additional details, specifically in the area of STEM education that can have a positive impact on the education of our students in particular areas like math and science.

One of those additional details is the creation of a new competitive fund that will help redesign America’s high schools to prepare students with the skills they need to find a job or go to college. This newly created fund would reward primary and secondary schools that create new STEM classes and make STEM a crucial staple in their curriculum. Furthermore, the administration will work with the Department of Education and allocate $80 million to recruit and prepare 100,000 effective STEM teachers within the decade.

These teachers would be part of the president’s newly created STEM Master Teachers Corps that would help manage the expertise of America’s best and brightest teachers in the field of science and mathematics. The goal of the new STEM Master Teachers Corps is to elevate the teaching of these subjects in local schools and districts by providing them with improved STEM instruction and resources.

So why did the president and his administration include these new STEM measures in his budget?  A recent House Committee on Education and the Workforce hearing on improving STEM education in America provided a suitable answer. In the hearing, it was stated that by 2018, the United States will have more than 1.2 million job openings in STEM occupations. However, the daunting reality for many employers is that there will not be sufficient American workers who are qualified in STEM to fill those vacancies. As stated by Rep. Todd Rokita (R-IN), “the supply of workers with the skills needed to fill these in-demand positions has fallen short during the last decade.”

So where does the United States currently find itself when it comes to STEM preparation?  According to the Government Accountability Office (GAO), in the fiscal year 2010, 13 federal agencies invested over $3 billion in 209 programs that were geared towards improving the basic understanding of STEM fields and increasing the attainment of STEM students. However, this substantial quantity of funds invested in STEM areas has not produced the desired result.

One explanation is the duplicity of the 209 programs. In their STEM report, the GAO found that 83% of the programs overlapped with at least one other.

The president hopes to address this issue, as he proposed a reorganization of current federal STEM sponsored programs. The reorganization involves a consolidation of 90 programs across 11 different agencies and the realignment of ongoing STEM education activities to improve the delivery, impact, and visibility of STEM efforts. As a result, nearly $180 million will be redirected from consolidated programs towards the Department of Education and other organizations like the National Science Foundation (NSF), and the Smithsonian Institution. Furthermore, the newly created STEM Master Teachers Corps will help oversee this consolidation.

George A. Scott, director for Education, Workforce, and Income Security issues at the U.S. Government Accountability Office, says duplicity isn’t the main issue. According to Scott, even when programs overlapped, the GAO found that the services they provided and the populations they served may differ in meaningful ways and would therefore not necessarily be duplicative. The main issue concerning the ineffectiveness of current STEM programs is that a majority of them had not been evaluated since 2005. As a result, the programs and outside evaluators do not know what works, what does not, and how the program can be subsequently improved upon.

Percentage of STEM Education Programs, by Status of Evaluations since 2005 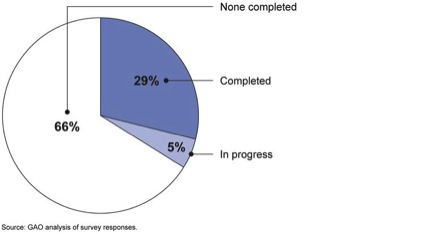 Increasing STEM achievement among American K-12 students is vital for future American economic success, due largely to the fact that STEM jobs are growing at a faster rate than any other job field. As a result, President Obama has made it clear that increasing STEM educational knowledge among primary and secondary students, as well as STEM degree attainment, is a key educational priority during his second term in office.  Also, House Republicans, like Rep. Kline, realize the importance of improving STEM education in America. It appears that this may be an issue where compromise and real educational reform may occur, in what has been an otherwise strained relationship between the President and Congress.