In his State of the Union address, President Obama unveiled his administration’s goal to introduce universal preschool for children four years of age, from low and moderate-income families. To finance this, the White House’s goal is to allocate federal funds to states based on their share of four-year olds from low- and moderate-income families, as well as funds that would be distributed to local school districts and other education providers in order to effectively implement the program. The major obstacle to the implementation of the president’s universal preschool program hinges on the willingness of Congress and states to spend billions of dollars on the new proposal.

According to the 2010 Census, there was close to 4.06 million four-year-olds living in America during that year. Using this data, the National Institute for Early Education Research (NIEER) concluded that in the 2010-11 school year, 28 percent of all 4-year-olds in the United States were enrolled in state-financed preschool programs, or close to 1 million students. 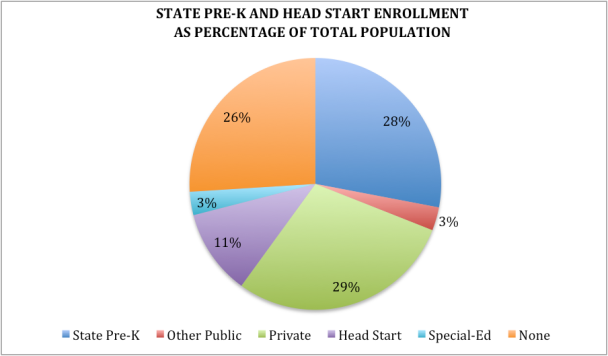 The president’s goal is to target the 26% of four-year-old children, or roughly 1 million potential preschool students, who are not going to preschool mainly for economic reasons. Furthermore, the administration recently published a White House fact sheet, which contains strategies to improve the quality of existing state funded preschools. Some of those include ensuring that all state funded preschool programs have well-trained, well-paid teachers, small class sizes, comprehensive health services, and detailed reviews of these programs.

Looking at preschool expansion, an estimate of around $10 billion per year would need to be spent in order to cover the sudden increase in eligible preschool students. This statistic includes approximately $5 billion per year to cover the increase in state expenditures per child. According to the NIEER, the total reported state spending per child enrolled in a state sponsored preschool was $4,847, thereby producing a cumulative total of close to $5.5 billion in state and federal aid for the 28% of four-year-old students attending preschool during 2010-2011. In addition, the U.S. Department of Education and the Obama administration plans to match the $5 billion per year that states will be required to give, thereby resulting in the universal preschool program totaling around $10 billion per year.

The Center for American Progress, which provides the president with educational statistics, came up with a similar number. According to their report, The U.S. Department of Education would provide federal grants to state education agencies based on a matching formula that considers district concentration of poverty, state fiscal effort, and the cost of providing education. States would be required to contribute their own funding to receive the federal match and the estimated 10-year federal cost is $98.4 billion over existing spending levels, or $9.84 billion per year.

The millions of dollars in annual costs to states to provide not only universal but also quality preschool for its four-year-old population will be in a huge burden. Currently, there are 51 preschool programs in 39 states plus two programs in Washington, D.C., meaning that eleven states cater to no four-year-old students. 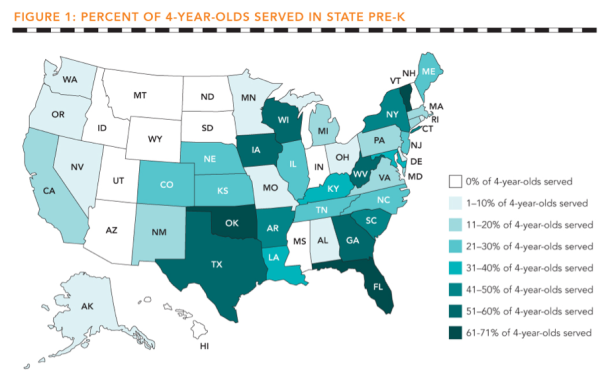 Also, according to the NIEER, states across the nation have been reducing their preschool programs by an average of $487 per year, resulting in state per-child spending of $715 below the 2001-2002 level; a 15 percent decline. Furthermore, four states are now enrolling a smaller percentage of 4-year-olds today than they did a decade ago: Michigan, Minnesota, Missouri, and Ohio. Lastly, only twenty states reported spending more than $4,847 per child enrolled in pre-K, meaning that the federal government wants to force the remaining thirty states to spend close to $5,000 per child, which in today’s tight budgetary politics is a daunting task.

Visiting a local preschool in Georgia the day after his State of the Union, the president claimed that every dollar invested in a high-quality preschool education can save a state more than seven dollars in the future. The catch is that with states facing tough economic times, in order to generate enough revenue for the new proposal, states will begin raising taxes on an already overtaxed workforce.  Furthermore, with the date for sequestration rapidly approaching, policy makers in Congress will be looking for ways to reduce federal spending, not increase it.

With the national debate centered on fixing America’s ailing economy and avoiding the sequester cuts, it may take several months, possibly a few years, before a national dialogue on universal preschool reform occurs. Until then, President Obama will face major obstacles in passing a universal preschool plan in America.