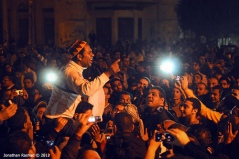 The author of a New York Times article this month criticized the rioters in Egypt, arguing that they should have voted Mohamed Morsi out of office in a democratic way when dissatisfied with his tenure in office.

Of course, he is correct. If Egypt’s democracy were thriving, dissatisfied citizens would have rallied support for the next election. But Egypt is still in the early phases of democracy and has not yet built the structure and confidence necessary for the democracy to function well. Protests and military coups are disruptive and chaotic, but they could be signs that the Egyptian people, like the early Americans of the 18th century, are learning from their mistakes in order to prepare themselves for a peaceful democracy.

Although former President Morsi, a member of the Muslim Brotherhood, was democratically elected, a look at the country’s political party structure may shed light on his failure. Because of the Muslim Brotherhood’s powerful presence in Egypt, it already had the grassroots structure in place to elect its candidate. Morsi did not meet the people’s expectations once in office, and his flaws may have been detected earlier if he were pitted against a viable opponent in the election race.

Morsi’s opponent in the 2012 election, Ahmed Shafik, was a former Prime Minister under unpopular president Hosni Mubarak. He gleaned support from those who, among other reasons, did not want an Islamist leader in power, but Egyptians expressed frustration that they had to choose “between two of Egypt’s most polarizing politicians.”

Morsi’s position as head of the Muslim Brotherhood and Shafik’s history as an official under Mubarak’s leadership may not have provided the Egyptians with viable options. Additionally, Shafik ran as an independent and did not have the substantial organizational support that Morsi enjoyed through his party. In order for both candidates to have a chance, parties must have comparable infrastructure in place. This takes time and proper education in the details of democracy.

Although it would have been ideal for Egypt to have peacefully elected a different leader, democracies often begin with violent clashes. America’s first years were turbulent and the original Articles of Confederation were thrown out and rewritten when they proved unsuccessful. It was not until after 1860 – when the South tried to secede from the rest of the country – that the nation settled the essential questions of citizenship and slavery. Even today, politicians and judges are interpreting the meaning of the Constitution.

The Egyptian people clamor for democracy and may well achieve it with patience. A new democratic system takes time to develop with the stability and organization necessary for success: free elections, peaceful turnover of power, compliant rulers, checks and balances, rule of law, freedom of speech and of the press, protection of basic rights, and a stable economy. These are the prerequisites for and the safeguards of democracy.

Although Morsi was democratically elected, his identity as a religious leader brings another complication to the election process. His supporters promote him with religious zeal. His opponents view him as oppressive and dangerous to their freedom. These divisions cut much deeper than those of the American bipartisan electorate and led to Morsi’s forced removal. If the people of Egypt truly desire to establish a democracy, they will advocate for the separation of church and state. If they are educated in or conscious of the liberal ideals that form the basis of democratic thought, they may be rewarded for their patience.