The Marcellus Shale is the name given to a geologic formation of sedimentary rocks, located in the North East of the United State of America. It is yet unclear on how much Natural Gas is contained in these rocks, however in 2012, the Environmental International Agency (EIA) estimated  the unproved technically recoverable reserves  to be close to 141 trillion cubic feet. 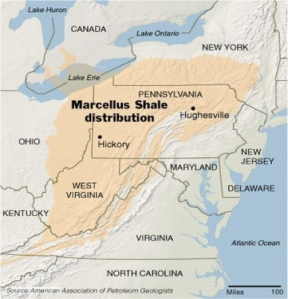 Facing such an abundance in natural gas, but also the recent Crimea crisis, a debate has developed between those who believe that the US should start exporting Liquefied Natural Gas to boost the economic growth of the country and those who believe that exporting LNG will have too much of an environmental cost to be done. With appropriate regulations, and the proper technology, LNG exportation could really become a “win win win” situation.

Firstly, in a world where we are facing the threat of climate change, natural gas stands as one of, if not the, cleanest fossil fuel resource. So exporting LNG can still be associated to an environmentally conscious initiative. According to the EIA, burning natural gas instead of coal reduces CO2 emissions by nearly 40 percent.

Secondly, exporting natural gas will greatly benefit the US Economy. According to a 2012 report from NERA and the Department of Energy: “Across all scenarios, the U.S. [is] projected to gain net economic benefits from allowing LNG exports”. Thousands of high paid jobs will be created (Marie Landrieu affirmed that nearly 200,000 jobs could be created, and that is only in her home state of Louisiana). The same study reveals that unlike the thoughts of many, it will not diminish the domestic supply but will stimulate it. Moreover, it will generate billions of dollars on a yearly basis – money that will greatly benefit federal and state government revenues.

The recent Crimea Crisis is a symbol of a world where Energy Security became one of, if not the most, important aspect of a nation’s economy. Russia is using its important energy resource as a weapon to force European countries to adhere to their politics. The USA, a nation that stands for Freedom, could offer Europe a release from President Putin grip by providing them with the LNG they need. At the same time, it would be a great opportunity for the US to strengthen relationship with ally nations.

Nevertheless, and very justly, environmentalists have raised concerns on how hydrofracking (a new technique that allow access to natural gas reserves that were once unreachable) is a serious threat to the environment. Indeed, hydrofracking uses water in which chemicals are added, making it toxic. Hence, according to a 2013 report from Environment America, fracking wells nationwide generated an estimated 280 billion gallons of wastewater in 2012. In a world where clean water is becoming more and more of a scarce resource, there is no doubt that this is a major issue.

However, greener fracking alternatives do exist, some of them are described in a recent National Geographic article as the following:

Through proper regulations and technology adaptation, LNG exportations could definitively turn out to become a “win win win” situation. The first “win” will go to the economic growth of the country, as many jobs will be created, and government/federal revenues will be reinforced. The second, towards fighting the hostile influence of Russia in Europe, and strengthen diplomatic relationship with ally nations. Finally, the third “win” (and maybe most important) will go towards reducing the carbon footprint of the human activity on Earth, while still continuing this activity.