Health care policy in our nation is a car with two engines and two drivers relentlessly pulling against each other, creating an incredible mess that will be a responsibility for those not driving to clean up. This endless tug-of-war is stopping anything from being accomplished, and it seems that neither side shows any signs of letting off the gas. 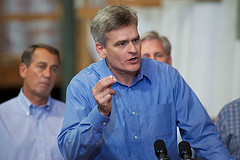 This past week, House Republicans passed H.R. 3522, which would allow individuals to stay on their health insurance plans, plans that were not up to the standards of the Affordable Care Act (ACA) and were consequently canceled, until 2019. Rep. Bill Cassidy (R-LA) drafted the bill to help deliver on the failure of the ACA to deliver on one of President Obama’s largest promises: “If you like your private insurance plan, you can keep your plan. Period.”

Although the bill was meant to help Obama and the Senate fill one of the promises they made while creating the ACA, this is not how they have interpreted it. Rather the administration views the bill as a measure to completely dismantle the ACA. The President has already made it clear that if the bill were to make it to his desk that he would veto it, but it doesn’t even look like the bill will make it to the Senate floor. While these comments represent the Democrats’ general stance on the bill, there were still 25 Democratic House members that voted in favor of Rep. Cassidy’s measure. This failure to even review the bill is due to the official party line, expressed by Rep. Jared Polis (D-CO), that Democrats believe the country is ready to move forward with the ACA and that Republicans – rather than attempting to repeal it – should roll over and let it happen.

The Democrats believe, and want the American public to believe, that the country is ready for the ACA to move forward as it is currently constructed. But, is the country truly ready to move forward with the ACA? According to a poll from the Wall Street Journal and NBC News, only 34% of Americans are in favor of the current structure of the Affordable Care Act while 48% oppose it. A further break down of those numbers shows that only 26% of independent voters approve of the bill and those in opposition have grown to 51%. From these numbers we can clearly see that the country is not ready to move forward with the current version of the ACA. An even more impressive political oversight by the administration is that the 25 Democrat members of the House that supported the bill are all in tight reelection campaigns and see approving Representative Cassidy’s bill as a way to earn public support and win their elections. Maybe rather than continuing to move forward full throttle it is time for the administration and its supporters to hit the breaks and hear what the rest of the American population has to say.

This “reaction to over-reaction” brand of politics is one that affects several areas of policy, but none greater than health care policy. If each slight alteration made by one side is continuously met with a complete rejection from the other, then no progress can be made towards improving what the American people see as a broken policy. Now is the time for law makers to step out of the double engine car and upgrade to a newer model, one that requires them to work together to move forward rather than continuously fighting with each other to move in any direction at all.

One thought on “Health Care Policy: The Double Engine Car”