As the Federal Communications Commission (FCC) prepares to expand its regulatory reach to encompass internet providers under Title II of the Communications Act, many have objected that the measure will reduce investment needed to expand overall broadband capacity. The new order will increase uncertainty both about what shape enforcement of the rules will actually take and about the outcome of inevitable litigation. This uncertainty will cause current and potential Internet service providers (ISPs) to hold onto their assets to see what rules they will have to follow before sinking money into new infrastructure.

The loss of investment will be devastating to the growth of broadband technology. Kevin Hassett and Robert Shapiro published a paper showing that the reclassification could lead to a $45 billion reduction in investment by ISPs. Since the goal is to increase the quality and availability of internet, the FCC should be seeking to create policies which encourage ISPs to invest in broadband infrastructure in order to increase the overall capacity. Title II reclassification does the opposite.

While FCC Chairman Tom Wheeler has been quick to dismiss criticism of his plan from ISPs themselves, the providers are unanimous in the view that Title II is bad for everyone. And the detractors are not just big cable companies protecting their profits. A group of 43 government run municipal broadband providers sent a letter to the Chairman saying that the new rules “will undermine the business model that supports our network, raises our costs and hinders our ability to further deploy broadband.” Since Wheeler has been a strong supporter of municipal broadband expansion, he should heed the warnings that his Title II plan will stand in the way of expansion of development.

As the next regulatory leap approaches, it is worth looking at how the agency’s other attempts to regulate industries have affected growth, and, unfortunately, it does not appear that they have been very successful. Using data from the U.S. Census Bureau’s Statistics of U.S. Businesses (SUSB) and George Mason University’s RegData.org, we can evaluate the correlation between FCC regulation and firm creation. SUSB has recorded the number of firms in a given industry. RegData provides a regulatory index which is based on how much a given regulator (in this case the FCC) has impacted an industry. Both designate “industry” using the North American Industry Classification System (NAICS) and Standard Industrial Classification (SIC) so the data are comparable. 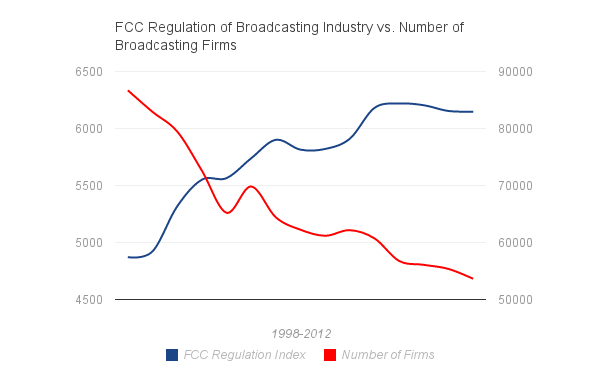 This strong correlation lends credence to fears that the FCC negatively impacts not only industry growth but also competition within that industry. If there are fewer firms in an industry, then consumer choice becomes more limited. Since many net neutrality advocates are concerned about broadband monopolies, they should oppose FCC regulatory adventurism.

There is also a strong negative correlation between FCC regulation and the software publishing industry. The graph below shows this relationship which is a correlation of -0.94. 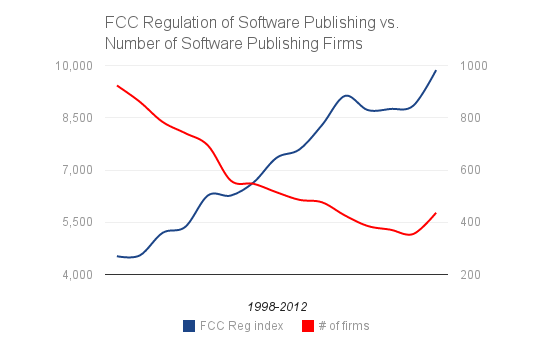 These data should cause proponents of the FCC’s foray into heavy handed broadband regulation to temper their enthusiasm. The numbers are strong evidence that the agency’s actions taken in the name of consumer protection are actually negatively correlated with industry growth and consumer choice. The new FCC regulations will have the same effect: increasing uncertainty and discouraging investment; it is bad news for internet users everywhere.