It’s graduation season! And according to sources from both the White House and the Fed, the current unemployment rate of only 5.5 percent signals a wealth of opportunity for grads.   Furthermore, the unemployment rate has been consistently declining.  This means that all of us in Class of 2015 should breathe easy; the time has come to graduate with full-time job offers and embark on our new lives in the professional workforce.

Unfortunately, that is not the whole story.  As a member of this year’s graduating class, I have stood back and witnessed even the most qualified of my peers choose to pursue graduate school as a means of hiding from the grim reality that is today’s job market.  It should come as no surprise then that my class has racked up the highest amount of debt to date:  a recent analysis of government data found that the average indebted student will graduate this year with over $35,000 of student loans.

For those who do manage to graduate with job offers, their professional futures may still remain bleak.  For instance, many recent graduates are forced to begin their careers by working in either part-time or low-skilled positions.  To make matters worse, many must also compete for the same jobs with Master’s and PHD graduates who are just now entering the workforce.  Last month, the Economic Policy Institute released a report  describing the economic conditions facing the Class of 2015.  They identified the underemployment rate, i.e. the percentage of college graduates working in positions for which they are overqualified, as a whopping 14.9 percent.  This, compared to the national average underemployment of 9.6 percent, should be cause for concern.  Furthermore, the ratio of underemployed to unemployed workers has been on the rise.  This indicates that the amount of involuntary part-time labor and overqualified workers is not falling as quickly as the overall unemployment rate.  It also means that many Americans are dissatisfied working in positions below their education level.  These troubling realities signal a major problem for this year’s graduates and a compelling reason to question Janet Yellen’s rosy unemployment statistics.

The question remains, why is there such a disconnect between our 5.5 percent unemployment rate and the harsh reality of today’s job market?  One fundamental statistic that has been steadily declining since the Great Recession is often ignored: the labor force participation rate (shown in the graph below). 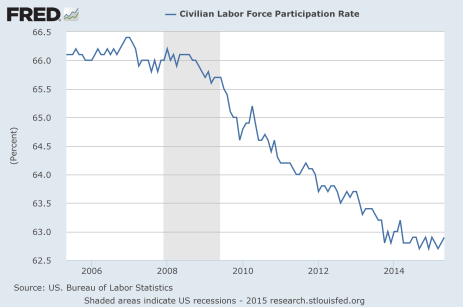 These conflicting unemployment and labor force participation rates can teach us a valuable lesson: even though the American economy has been generating  jobs, there is something still holding employers back from hiring new talent.  One major contributing factor has been the erroneous regulations and increased costs imposed on businesses over the past few years.  The Affordable Care Act’s employer mandate alone is predicted to cost businesses at least $5,800 per employee in 2016.  Not only does this have the potential to cripple family owned small business, but it is also having damaging impacts on the job market.

Americans need to recognize the hidden reality behind the falling unemployment rate.  And for all of us in the Class of 2015, it is time to prepare for a difficult job search.

Congratulations, Graduates! by Caro Wallis is licensed under CC BY-NC 2.0