Anyone who has ever taken an economics class recalls the first basic principle; nothing is free. Everything has a cost. Whether it’s time or money, there is a ticket to everything. Recently, politicians like Bernie Sanders have been campaigning on the promise of free college education to promote opportunity for all. This call has students scrambling in support, who are often unaware of the actual cost state’s are burdened with when initiatives like free education come to fruition. When President Obama announced his $60 billion initiative to provide two free years of community college 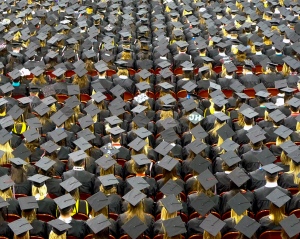 University of Nebraska – Lincoln caps via John Walker on flickr

education, states had to decide whether or not to opt into the program.

The cost to states, however, is a significant figure. In countries like Scotland where the tuition is free for students, there is still a load of intrinsic costs for students. “While tuition is free, living expenses are not covered. Free tuition resulted in lower grants used for housing and students in need had to rely more on loans. Richer students, especially those who lived at home, got a huge subsidy. Poorer students, who needed to move to be closer to school, ended up with more debt.” Making tuition free takes away from a student’s ability to receive aid for other expenses incurred while in school, such as living expenses, which have increased drastically in recent years

Free education is costly to the students and the families of the students, but also to the states in which they live. “The president’s proposal is structured as a matched investment, including an additional commitment to making and sustaining appropriate funding increases. The annual cost of expected state investment varies substantially, from as low as $7.4 million in Vermont to more than $349 million in New York.” This cost is felt by citizens, due to the increased spending by anywhere between 5 and 13 percent by states. Increased spending leads to increased taxes. It is estimated that costs for this program could reach $4.1 billion for the states.

This would cost tax wedges to increase in the United States drastically. The Organization for Economic Co-operation and Development (OECD) released its 2015 report on the tax burden on earnings among member countries. The United States has a 31.5%, tax wedge, where as Germany, who offers free-tuition, has a 49.3%. “While the tax wedge is certainly not driven solely by free-college tuition costs, the countries that offer this benefit have much higher income tax rates than the US. If the U.S. were to go the route of European countries that finance free college by taxing the income of citizens, the tax wedge of 31.5% would likely increase.”

Universal free education is a noble cause, but it is simply not practical. An alternative method to addressing this issue would be to expand grants and scholarships, rewarding good outcomes rather than granting resources that are not always well utilized. Each state is aware of their education systems, and while states need to make an effort to help make education more affordable, this must remain a state issue.