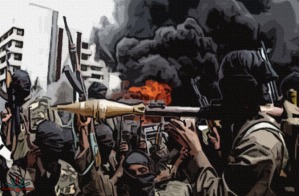 Generally, little attention is given to the jihadist group based out of Nigeria known as Boko Haram. Much of the world learned about the group in April 2014 after the kidnapping of 276 schoolgirls from their dormitory in Chibok. Approximately 50 of the girls escaped, but little is known about the remaining 225 girls, besides the common assumption that they have been brainwashed, tortured, and probably sold into marriage.

The group allegedly allied itself with al-Qaeda until announcing its allegiance to the Islamic State in March 2015, almost a year after the kidnapping. In the past seven years since the start of their insurgency, more than 20,000 people have been killed and 2.3 million have been displaced from their homes. Yet, despite the high numbers, only 300 U.S. troops have been deployed to Central Africa. The purpose of the installment of the troops is to gather intelligence through the use of drones to aid the U.S. counterparts in Cameroon. These troops will not be used for combat purposes. The U.S. will not send aid to the Nigerian government due to its abysmal record of human rights and corruption.

Scott Stewart, the director of tactical analysis for geo-political intelligence for Stratfor, told Foxnews.com that despite the U.S.’ conscious efforts to avoid providing strategic information to the Nigerian government, it is highly likely that they will obtain the information through Cameroon. Stewart explained the reason for the rise in power of Boko Haram: “the corruption of the Nigerian military helped recruitment for Boko Haram and their incompetence has helped even more.” Despite the recent election of Muhammadu Buhari and efforts by the Nigerian military to push back the group, Boko Haram still maintains a large presence in the country and region.

Boko Haram’s continued presence becomes an economic concern due to its ongoing influence in the oil rich region. Nigeria is a member of OPEC and according to the OPEC website, “the oil and gas sector accounts for about 35 percent of gross domestic product, and petroleum exports revenue represents over 90 percent of total exports revenue.” Nigeria is considered the tenth oil richest country according to U.S. Energy Information Administration (EIA). The majority of the Nigerian oil reserves are located on the southwest coast. Geographically, it is far from the organizations control of northeastern Nigeria, but the southwest has become an active combat zone recently. Although, the location is opposite of the country in relation to Boko Harams northeastern control of Nigeria, Boko Haram could potentially gain control of the oil-rich region. Such control would give the group the resources to grow exponentially as an organization.

Senator Marco Rubio stated in July of 2015 “it’s important that the U.S. and Nigeria keep working closely together to defeat Boko Haram. This Islamic terrorist group, which has pledged allegiance to ISIL, continues to murder and kidnap innocents in Nigeria and neighboring countries… the U.S. has already pledged assistance to the multinational effort to fight Boko Haram, but President Obama should reiterate the U.S.’s dedication to this effort.” Rubio continues his argument by acknowledging that the U.S. is the largest foreign investor of Nigeria. That same month, Rubio introduced S.2078, United States Commission on International Religious Freedom Reauthorization Act of 2015, which would empower the USCRIP and the State Department to assess the religious freedom violations of non-state entities like Boko Haram, which is increasingly among the most severe religious freedom violators in the world. S.2078 became a public law on October 16, 2015. However, since then, little action has been taken that is of public knowledge besides the deployment of troops to Cameroon. As Rubio argued in July 2015, it is important that the U.S. government more actively works towards assisting the Nigerian government in the fight against Boko Haram in regards to religious freedom.

Due to the unpredictable future of the organization and the ongoing corruption in the region, it is imperative that efforts are taken to stop the organization before it gains even more power and causes more destruction. According to the Global Terrorism Index, Boko Haram and the Islamic State were responsible for approximately 51% of all global fatalities claimed by any group. Total number of deaths by terrorist attacks rose to 32,658 people in 2015. Consequently, it’s essential that action be taken to help slow down, and eventually stop, the destructive path of Boko Haram.