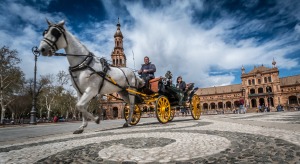 We’re all familiar with the clichéd scene of a New York tourist riding through Central Park in a horse-drawn carriage. It’s usually a beautiful fall day. Everyone is wearing light jackets as a breeze is blowing, causing brightly colored leaves to dance across the street in front of the horses pulling the carriage. A couple sits behind the carriage man, sharing an intimate moment.

What is now considered something only a tourist would do or the seminal moment in a romantic comedy was once the only way to get around New York City. It’s not even in that distant of history that this was the case in America’s metropolitan greats. Prior to the proliferation of the automobile in the 1920s, horse-drawn carriages were the norm. Taxis were even later to follow.

The horse-drawn carriage is confined to a novelty now because the car proved to be a disruptive technology to that industry. Innovation offered an alternative to the status quo that proved to be superior. Unable to compete, the carriage was swiftly pushed aside. We stand on the precipice of a similar disruptive technology: the sharing economy. The sharing economy, where individuals use an Internet platform such as Uber or Airbnb to maximize the value of what they own, is sundering conventional industries. In the interest of consumer benefit, these disruptions should be encouraged. The industries that stand to lose the most are the taxi industry and the hotel industry, and they don’t intend to go down without a fight.

The reason these platforms are such a disruptive technology is because they increase the total competition in markets. Previously, taxi companies had a monopoly when it came to on-demand transportation in a city. The same can be said of hotels, which were the only game in town when it came to short-term stays. Uber has offered more options for getting a ride, and Airbnb offers an alternative to staying in a corporate hotel chain when taking a vacation.

The traditional industries that are being disrupted have engaged in every tactic possible to retain their market shares. Not content to battle solely in the marketplace, these institutions have appealed to government to help in maintaining their positions. Government’s response, however, has varied depending on the branch appealed to. At present, both the judiciary and the legislature have been called upon to restrict the disruptions of these new technologies.

What the courts have done

The judiciary has prominently been called upon to weigh in on this issue is the 7th Circuit Court of Appeals. [1] The taxi companies in Chicago sued the city of Chicago for failing to require Uber to meet the regulatory requirements of a taxi. Their argument is that Uber is a de facto taxi company. Judge Richard Posner, writing for a three-judge panel, disagreed, stating that Uber and taxis are inherently different and, as such, can be regulated differently.

Judge Posner went on to say that a government license to perform an activity does not grant the right to preclude others from the activity: “Indeed when new technologies, or new business methods, appear, a common result is the decline or even disappearance of the old. Were the old deemed to have a constitutional right to preclude the entry of the new into the markets of the old, economic progress might grind to a halt.” Judge Posner went on to say that allowing a license holder to bar an entrant to the market would allow “obsolescence to equal entitlement.” Therefore, requiring an entrant to meet all the regulatory requirements of an incumbent is an anti-competitive argument.

Having made this claim, that an anti-competitive argument cannot succeed, the 7th Circuit Court of Appeals encouraged competition and innovation in the market. A key means of innovation is disrupting the status quo by offering alternatives to current business methods. Through supporting competition, the idea of a disruptive technology is seen as a positive among the judiciary, or at least within the 7th Circuit Court of Appeals.

How legislatures have approached the problem

The primary means through which legislatures have approached platforms as a disruptive technology are municipal regulations. San Francisco and New York City, two of the largest markets for Airbnb, have passed ordinances that ban or significantly limit Airbnb. Airbnb, which is one of the largest platforms for short-term home sharing or rentals, has had a disruptive effect on the hotel industry. The hotel industry was previously the dominant player when it came to short-term rentals. This has changed with Airbnb’s innovation using platform technology.

Through its app, Airbnb allows homeowners to offer their homes to travelers when they are not present — for example, if they go away for the week. The advantage for hosts is increased revenue that they can use to fund their living costs. The guest is benefited by having a more cost-effective alternative to a traditional corporate hotel. Despite this being perceived as a benefit to many users of Airbnb, it has reduced the market share of hotels and they have lobbied municipal governments to ban short-term rentals for being unsafe and failing to meet the regulatory requirements of traditional hotels. This tactic has succeeded in several key markets.

In the case of San Francisco, Airbnb hosts are required to register with the city for a fee so that the city may gain additional revenue and regulate the housing stock available. [2]

In the New York case, the law bans all rental listings for less than 30 days. [3] Both of these approaches are uninviting to market entrants. In the former case, the registration requirement allows the city to limit the extent of disruption Airbnb can cause in the market. In the latter case, New York has taken the anti-competitive stance of banning any market entrant that does not meet every regulatory requirement of an incumbent, the hotel industry.

Unlike the judiciary, legislatures have not welcomed disruptive market participants and innovation. They have arbitrarily decided that the status quo is sufficient and that attempts to change it must be prohibited. This perspective is interesting and concerning. Innovation, when viewed in hindsight, is seen as a valued and celebrated achievement; few, if any, would argue for the return of the horse and carriage over cars. Why, then, does the legislature seek to maintain a status quo, rather than adopt the judiciary’s approach of welcoming innovation and the competition it inspires?

How can legislatures correct their course?

The goal of innovation and why it is encouraged is to improve conditions for the consumer. This is the point Judge Posner made when he spoke favorably of disruptive entrants to a market. Frequently, the innovator offers consumers options that were previously unavailable but were desired. Legislatures, by attempting to prohibit these innovators, are not acting in consumers’ best interests. Rather, they are acting in the interest of market incumbents who fear that disruptive entrants will disrupt and potentially overtake their positions in the market.

Legislatures, therefore, should reverse course and welcome innovation. This does not mean, however, that legislatures must actively promote disruptive entrants. Rather, legislatures can take a hands-off approach and allow the market and its consumers to settle the issue. An example of this approach is Arizona’s solution for Airbnb. In response to many municipalities banning Airbnb in some form, the state legislature passed a bill that pre-empted each municipal ordinance, explicitly permitting Airbnb to operate. [4] The legislation also included requirements that Airbnb collect tax revenues, a benefit for the state, but the message was clear. Arizona welcomes innovators that disrupt the current state of affairs in the market, and incumbents can either adapt or go the way of the horse and carriage, becoming a novelty for tourists.