The Reality of Unemployment in the Youth

Unemployed persons are typically defined by the Department of Labor as people who are not employed but are actively seeking a job. When the Department of Labor measures youth unemployment they take measurements in April and gather numbers through July. April is the beginning of hiring for the summer, typically a time of the highest youth employment in a given year. July is considered the peak month of the summer and because of this gathering of numbers ends in July.

In July of 1989, the youth labor force reached its highest value of 78 percent of the youth population. This labor force is the combined percentage of those employed and unemployed in the demographic. In 2008, the labor force was at 65 percent, and by 2013 it was now at 60 percent.

How Do Young Women Fare?

We know that less than half of the youth population is employed. How does this problem match up with gender equality? Are young women receiving a fair chance of employment in this harsh job market? The Department of Labor shows that 58 percent of young women were members of the labor force in 2013 and fifteen percent of them were unemployed. 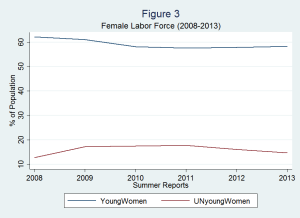 Once again, the removal of unemployment from the “labor force” shows that the number of actually employed young women is slightly above forty percent. In each year since 2008, women have been at least one to two percent less employed than the total employed workforce of the youth population. Gender inequality in women is still quite apparent. In 2008, the actual employment of young women was 48 percent. Now, in 2013, it is at 43 percent.

Presented with these glaring differences in total employment and female employment in the youth population, it seems that gender economic equality is still a problem. With these concerns, how do they affect the economics on young women?

The Economic Woes of Women

If young women have fewer opportunities to earn wages, then it is more likely they will be need the monetary assistance granted to those four times under the poverty level, and be less likely to be paying into the system.

Under the Affordable Care Act, a one-person household is below the poverty line and qualifies for subsidies if its income is less than $45,960. If young women are less than fifty percent employed, then once they are out of their parents’ umbrella of wealth and income, they will most likely move straight into poverty.

It is interesting, as a young man, to know that my generation is economically poor and jobless. My generation is not experiencing wealth and prosperity. And my generation will be asked when we are older to bear the tax burden. But will we have jobs when the time comes?