According to a new research study published in Health Affairs, the elimination of diseases such as cancer and heart disease would have less effect on longevity and quality of life than delaying aging itself.  Although most medical research remains focused on combating individual diseases, the study’s authors used a micro-simulation of the future health and spending of older Americans and compared optimistic “disease-specific” scenarios with a hypothetical “delayed aging” scenario, to determine that delayed aging is estimated to increase life expectancy by an additional 2.2 years, most of which would be spent in good health.

Adding much weight to the argument, improvements in life expectancy and recent progress in biology have increased the promise of research and development in delayed aging.  In fact, the possibilities of extending life years has been a topic of ground-breaking research by altering reproduction, reducing caloric intake, modulating the levels of hormones that affect growth and maturation, altering insulin-signaling pathways, and manipulating genes. As a result, scientific researchers suggest that drugs that combat aging may be available within five years.

Earlier this month, a new study was published in the journal Science Translational Medicine revealing the anti-cancer benefits of the chemical resveratrol.  For over a decade, this substance, extracted from the skin of red grapes, has been known to retard aging in mice.  More importantly, the study found that “resveratrol generated from resveratrol sulfate is able to slow the growth of cancer cells by causing them to digest their own internal constituents” and stop them from spending energy on growth and reproduction.

Accordingly, the Health Affairs study suggests that if anti-aging interventions were available, anti-aging drugs should both increase the fraction of life spent in good health and help prevent end-of-life care from racking up damaging medical expenses.  Simply put, the authors’ study poses the ultimate question–can we delay the onset and progression of all fatal and disabling diseases simultaneously through the process of slowing down senescence?

Jay Olshansky, a professor at the University of Illinois School of Public Health in Chicago and a co-author of the study said, “When we treat someone with cancer, or heart disease, or stroke, we are treating a manifestation or byproduct of biological aging – the underlying process marches on unaltered by this approach to disease.” With generations living longer, people are becoming more likely to fall victim to multiple diseases.  In fact, 37 percent of all Medicare beneficiaries have at least four chronic conditions (e.g. high blood pressure, heart disease, diabetes, cancer, and stroke), averaging to $12,174 Medicare dollars per beneficiary.  The study argues that delayed aging would yield significantly greater societal benefits than attempting to attack old-age diseases one at a time with increasingly costly therapies that are often applied when it’s too late to do much good.

To combat the increasing burden of chronic conditions, health economists have started to radically reframe the public health discussion on the topic of aging and address the improvement of health by broadening our scope.  To improve population health involves both improving the quality of life of individuals as well as the quality of care at the lowest cost.  Thereby keeping older adults healthier and, in effect, biologically younger, drugs or other interventions that delay aging would lower older adults’ per-capita medical costs.  To illustrate, assuming that an extra live-year is worth $100,000, the delayed aging assumed by the study would yield a “social benefit” of about $7.1 trillion over the next fifty years.  In contrast, mainly due to competing risks, addressing heart disease and cancer separately would yield diminishing improvements in health and longevity by 2060. 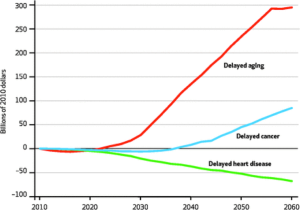 Since healthier older Americans might cost Medicare less in a given year, they’d be on Medicare longer.  Therefore, the study’s authors suggest that changes in entitlement programs would be necessary to offset future costs.  It is important to distinguish here that health economists do not intend to evoke a bureaucratic policy decision on aging, at least not just yet. Instead, I believe health economists wish to highlight how society tends to focus on the relatively short-term opportunities to improve health.

A new paradigm shift in public health is now approaching.  No longer will primary prevention be achieved by treating symptoms post-diagnosis, but rather by going after the very foundation of what makes us unhealthy.

The study doesn’t address many of the burning issues about anti-aging research, such as how much it would cost to develop drugs and other interventions that delay aging, how they would be made available, and when they might arrive.  Thus, before the implementation of any policy change, the study of the following would be required: an official CBO scoring; fuller consideration of distributional and health outcomes beyond the major entitlement programs; and consideration of the impact of any financing reforms, such as those in the Affordable Care Act.

Only time will tell how delayed aging will fare in medical research.  By translating health into dollars, the health gains of delaying aging are so overwhelming that they make this worth pursuing.  However, one conundrum of finding treatments to delay aging is who would get them.  Insurance companies and Medicare tend to pay for treating diseases, not preventing them.

As a result, the pivotal questions remain: how do we define success and how far do we intend to go with this?   How will delayed aging redefine public health prevention?  How will individuals’ quality of life be impacted and/or changed?  What would this concept do to change the market trends in home health, chronic disease management, health insurance (payment) systems, and health care professional employment?