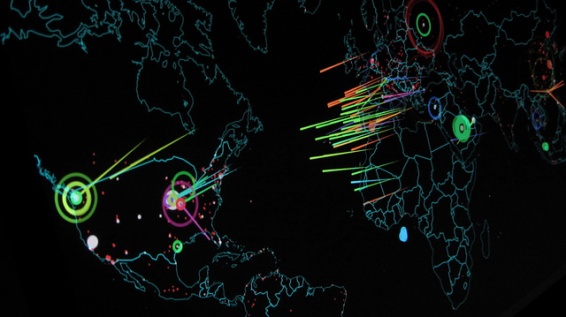 My first post on the “5th Dimension of Warfare” focused on the individual’s role in ensuring digital security across network systems. This entry will look at how hacking groups were able to take advantage of general weaknesses in outdated systems and gain access to a rural dam and a network of hospitals in the DC-metro area.[1]

Nearly every time I hear of a hacking operation, my mind’s eye immediately goes back to clips of the 1990s’ movie Hackers (was Marc Anthony really in that?!). Hyped music, quick, random video clips, and angsty teenage geniuses pitted against a disillusioned world – yes, that’s the image I have. Aside from its intentionally abrasive style, Hackers was fairly informative and its apocalyptic warnings certainly instilled a healthy fear of cyber weaknesses in my young mind. Today’s hackers no longer serve as simple fodder of sci-fi, techno thrillers, but their activities can endanger national infrastructures and compromise confidential operations, capitalizing on the bounty of network integration that has evolved in the past twenty years.

Most aspects of life have been digitized. Personal correspondences, ideas for crafting projects, banking accounts, dietary preferences, heating and cooling systems, your doorbell, electrical grids, medical records, directions to your friend’s house – from the mundane to the critical, life in 2016 depends on the flow of information in digital forums. The shift has been rather quick and has highlighted the individual and national vulnerabilities in the cyber-sphere.

Earlier this year, Attorney General Loretta E. Lynch presented the Department of Justice’s indictment against a group of seven Iranian hackers for the “Conspiracy to Commit Computer Hacking”. The indictment detailed a list of crimes that dated from 2011 to 2013 and included attacks on U.S. bank websites, an attack the Bowman Avenue Dam in Rye, New York, and an alleged attack on NASA servers. The apparent goal of the hacking group was to execute “distributed denial of service” (DDoS) attacks and disrupt operations.

A few weeks later, a different set of hackers infected the computer systems of Maryland’s MedStar Health, knocking the health care facility offline. The company shut down its computer system after the ransomware virus was detected and converted back to paper charts and beepers until the system could be restored.[2] MedStar’s attack was one of a handful of recent attacks on hospitals in recent weeks that took place in Kentucky and California. According to an article in the Baltimore Sun, the malware used to debilitate MedStar can be slipped into a network with relative ease.

In both cases, hackers were able to patrol system networks and find entry points when weaknesses appeared. Sometimes system weaknesses result from the disintegration of outdated software and network protections, in other instances, the hackers are able to gain access by harvesting identification and sign-in information from patrons (see Greenberg’s story).

Patches to address the vulnerabilities range in simplicity from updating network security programs to being aware of phishing schemes to developing a national cybersecurity strategy (and implementing it). Currently, businesses and systems across the United States function with a false sense of security in regards to cyber protections, putting our digital lives (the essence of how we now function) in a potentially precarious position.

The smallest and easiest step to take to address this glaring weakness is to educate employees on the dangers of opening emails from unknown senders and visiting questionable websites. The next step is for offices, companies, agencies, and departments to maintain up-to-date system protections. An outdated system could expose the nation’s digital infrastructures to outside cyber-attacks – whether on a rural dam or a regional medical care facility or a nation’s energy grid.

[1] If you want to read more about the Russian hack into the DNC system, I would direct you to Wired’s story. Andy Greenberg’s story addresses the two methods used by Cozy Bear and Fancy Bear, the names given to the two hacking groups who have suspected connections to the Russian government, which are similar to the methods outlined in this blog entry.

[2] Ransomware is a type of computer virus that encrypts digital files. These encrypted files then require a key to unlock them. The hackers responsible for the virus hold the key and offer to release it, if a ransom is paid, hence the term ransomware.